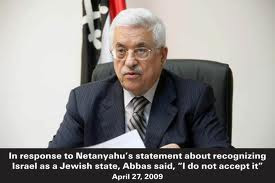 Imagine if any political leader would say: "No blacks will be allowed to live in my state". He would be denounced correctly, as a racist, a bigot.

That does not seem to include Mahmoud Abbas, the Palestinian Arab leader of Ramallah, who on the verge of the new "peace talks" in Washington just declared: "In a final resolution, we would not see the presence of a single Israeli - civilian or soldier - on our lands".

This is not "peace", but pure Nazism, it is ethnic cleansing. And instead of the expression "final resolution", Abbas should have said what he really means,  "final solution".

Addressing a session of Arab League in Doha, Qatar, Abbas in 2011 declared that “when an independent Palestinian state with Jerusalem as its capital is established, we won’t allow the presence of one Israeli in it”.

A Palestinian Arab State on Western Eretz Israel would be “jüdenrein”, or cleansed of Jews. A state founded on the ethnic cleansing of every single Jewish man, woman and child.

How can you call "peace" a deal in which hundreds of thousands of Jews surrender to expulsion or to becoming refugees like "lambs to the slaughter"?

Can you imagine if Benjamin Netanyahu instead of Mahmoud Abbas would have pronounced such a statement? What would have been the world reaction?

And Abbas said it in front of the long European noses. He proclaimed his Nazi intentions while in Cairo. Lady Ashton, the ridiculous EU foreign chief, was present.

But we must thank Mr. Abbas, because he said clearly that the "State of Palestine" and the Jewish presence in Judea and Samaria are exclusive. Israel would have to uproot all the Hebrew towns in order to pave the way for this "peace", which is in fact the new apartheid that he hopes will come into existence upon the ruins of the "settlers'" homes.

What Abbas said is the same message repeated from the Palestinian Arab mosques and streets: "Idbach al Yahud !" (Slaughter the Jews), "Mauwt al Yahud !" (Kill the Jews), "Falastin baladna, al Yahud kalabna" (Palestine is our homeland, the Jews are our dogs).

The PLO Covenant rejects the idea that Jews have any “historical or religious ties” to the land, since “Judaism, being a religion, is not an independent nationality”.
Isn't it pure Nazism?

PLO’s Article Six declares: “The Jews, who had normally resided in Palestine until the beginning of the Zionist invasion (usually dated as the mid-19th century) will be considered Palestinians”. In other words, 98 per cent of the existing Israeli Jewish population must be banished like, like the 8.000 Jews of Gush Katif. Or killed, like the Fogels of Itamar.

The PA's mufti of Jerusalem, Sheikh Ikremah Sabri, and the Palestinian chief Islamic judge, Sheikh Tayseer Tamimi, issued decrees authorizing the killing of Arabs who sell property to Jews and forbidding Muslims from burying them in Islamic cemeteries. Not even Nazi Germany in the 1930s knew this level of anti-Jewish pathology.

Or take the 'refugee' question. The PLO manifesto claims that the“Palestinian personality” is an “innate, persistent characteristic that does not disappear . . . and is transferred from fathers to sons” (No. 4). And what if all Palestinians had emigrated, or had become refugees from the land? They would still belong to “Palestine” along with their male descendants. Forever. This is like the Nazi “Drang Nach Osten” and “Blut und Erde”.

Abbas and other PLO terrorists are asking Israel and the United States to expel all the Jews, from the youngest to the oldest, so the Hebrew people will be stained by their presence.

If you assume that Area A and Area B are no longer negotiable, which is not true, note that 60 percent of Judea and Samaria is already free of Jews. And with the exception of the Jewish city of Hevron, there are no Jewish citizens in the big Arab cities, Nablus, Jenin, Ramallah, Tulkarem, Qalqilia. And also in Hevron, the city of the Patriarchs you have "Area A" (or H1), the jüdenrein part of Hevron.

To return to the "peace talks", what are these all about? The division of Jerusalem? Maybe, but only in a suicidal end game. The 'return' of the 'refugees'? Certainly not. These talks, like all the previous ones, are about the percentage of Jews of Judea and Samaria to be ghettoized, deported, killed and expelled.

The "State of Palestine" would be the carbon copy of Hans Frank's General Government in Poland. Two thirds of the nations of the world, represented in the United Nations, support the establishment of a state that would be, by definition, the first to officially prohibit Jews or any other faith since Nazi Germany.