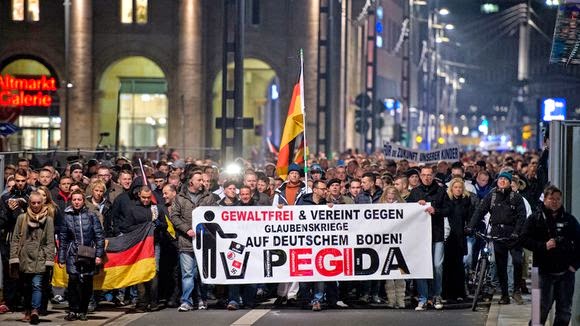 "Cancelled! Dear friends, unfortunately we must cancel our 13th meeting due to security concerns," the group "Patriotic Europeans Against the Islamisation of the Occident" said on its Facebook page on Sunday.

"What in police jargon is called an 'abstract threat' has changed to a 'concrete death threat' against a member of the organising team. IS terrorists have ordered his assassination."
Germany's Der Spiegel news weekly reported Friday that foreign intelligence services had picked up communications by some "known international jihadists", without giving specific details.

The intelligence, which was passed to German authorities, indicated they had discussed possible attacks on PEGIDA rallies.

PEGIDA said it had discussed the threat with state police and the internal security agency.
It had decided to scrap the event in the eastern city of Dresden as it could not guarantee the security of marchers and feared "collateral damage".

PEGIDA marches began in Dresden with several hundred supporters three months ago and have steadily grown, to number 25,000 last Monday, five days after the attacks in Paris by Islamists in which 17 people were killed.