The Guardian
by Rajeev Syal 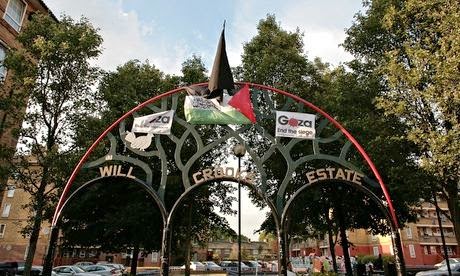 A black flag with white Arabic writing, similar to those flown by jihadist groups, was flying at the entrance of an east London housing state near Canary Wharf.

In a highly provocative gesture, the emblem was planted on top of the gates of the Will Crooks estate on Poplar High Street, and is surrounded by flags of Palestine and slogans.

The flag bears similar writing to the jihadi flags that have been flown by the extremist group in Iraq and other jihadi groups since the 1990s. When the estate was approached last night, a group of about 20 Asian youths swore at Guardian journalists and told them to leave the area immediately. One youth threatened to smash a camera.

When a passerby tried to take a picture of the flag on a phone, one of the gang asked him if he was Jewish. The passerby replied: "Would it make a difference?" The youth said: "Yes, it fucking would." Asked if the flag was an Isis flag, one local man said: "It is just the flag of Allah." But another man asked: "So what if it is?"

One local man said that the flag has been there for several days. "People were taking photos of it last night," he said. A Metropolitan police spokesman said on Thursday that they had received no complaints about offensive flags in the Tower Hamlets area. The Dutch government has banned the public display of the Isis flag, but it is not illegal in the UK.