Journalists threatened by Hamas for reporting use of human shields 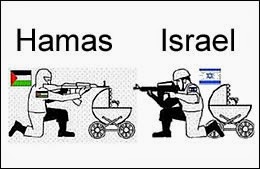 International press in Gaza has hardly reported on how Hamas operates in this round of fighting and photos or video of Hamas fighters from recent weeks are rare, the reason for which became apparent this week as several journalists reported being threatened and even expelled from Gaza for reporting the terrorist organization uses civilian sites to attack Israel.

Reporters from Italy and the US corroborated the IDF's explanation for explosions near Shifa Hospital and by a playground in Shati on Tuesday, that it was a result of rockets misfired by Gazan terrorists.

However, one altered his report and another waited to leave Gaza because he feared retribution from Hamas.

Italian journalist Gabriele Barbati tweeted a photo on Tuesday as he went through the Erez crossing  into Israel.

Barbati then he tweeted the following in Italian and English: "Out of Gaza far from Hamas retaliation: Misfired rocket killed children [yesterday] in Shati. Witness: militants rushed and cleared debris."

He followed that tweet with another: "@IDFSpokesperson said truth in communique released yesterday about Shati camp massacre. It was not Israel behind it."