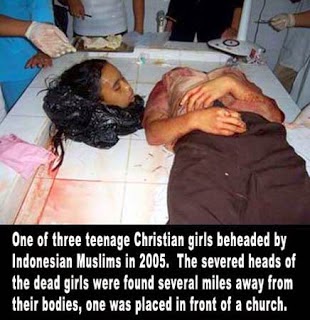 "At dawn on Christmas Day, the barbaric regime of Iran hanged 7 people in mass execution in Shiraz." — NCR-Iran.

There are always more and more frequent cases where the blasphemy law is used to target religious minorities or to settle cases of disputes or private rivalries, or simply as an instrument of blackmail." — Shardar Mushtaq Gill, Pakistani Christian lawyer.

Sudan's security agents and police have "broad powers to arrest Christians and other lowly-regarded people without cause, for creating public disturbance. The Christians were released after paying a fine of $250 each." — Morning Star News.

Islamic law holds that new churches are never to be built in Muslim lands and existing ones never repaired. Even so, many of these partially wrecked churches continue to be used, and are even packed, during church services.