Who are the real occupiers in the Middle East? 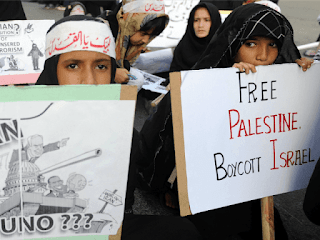 There Is No Israeli "Occupation": It’s Not Arab Land and 98 Percent of Palestinian-Arabs Live Under Arab Rule.

The U.S. Ambassador to Israel, David Friedman, recently made headlines for using the term “alleged occupation” during an interview with the Jerusalem Post.

Palestinian Authority (“PA”) dictator and Holocaust denier Mahmoud Abbas condemned the term “alleged occupation” and then falsely proclaimed that there is an Israeli “occupation of the territory of the state of Palestine” and variations of the same line some 27 times during his speech to the United Nations General Assembly last week.

However, an honest examination of the facts and actual international law reveal that Ambassador Friedman’s words were correct: In fact, the presence of Israel and Israeli Jews in Judea/Samaria (“West Bank”) and the old city of Jerusalem is not an “Israeli occupation.”

Occupation means possessing/exercising actual authority over another country’s sovereign territory. A nation who has the sovereign rights to land cannot be an “occupier” of that land. Israel has the lawful sovereign right – as well as the strongest historical, religious, and legal connection — to Israel, including Judea/Samaria and all of Jerusalem.

The Jews are indigenous people of Israel, including Judea/Samaria and Jerusalem. The word “Jew” comes from “Judea” – because this is where the Jewish people lived. (Jordan renamed Judea/Samaria “the West Bank” during Jordan’s 19-year (1948-67) illegal occupation of the area, as explained below). Jewish kings and kingdoms reigned in Jerusalem and Judea/Samaria for hundreds of years (c.920 BCE – 597 BCE). For over 3,000 years, there was always a Jewish presence in Israel, even after conquests and dispersions of the Jewish people.

By contrast, there has never been a Palestinian Arab state or kingdom in Israel, Jerusalem or Judea/Samaria. Ever. “Palestine” is not an Arab name but is a Roman name, named by the Romans in 135 CE for the geographic area, to attempt to de-Judaize Israel and Judea/Samaria, after destroying the Second Temple in 70 CE and crushing the Jewish Bar Kochba Revolt (133-135 CE).

Israel fell into desolation under Ottoman rule (1517-1917) and was sparsely populated then. Mark Twain wrote in 1867 that Israel was a “desolate country… We never saw a human being on the whole route… There was hardly a tree or a shrub anywhere."