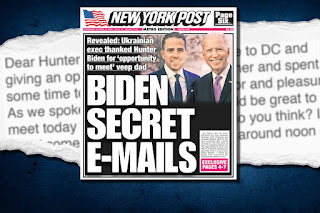 From RT.
Twitter blocks link to GOP page on CONGRESS website with copy of NYPost’s Hunter Biden story.
After downplaying the censorship of links to a New York Post exposé on the Biden family’s alleged murky business dealings, Twitter is still blocking links to the “unsafe” story, even ones posted by US lawmakers.
When the New York Post published a tranche of emails on Wednesday claiming to reveal Hunter and Joe Biden’s alleged backroom dealings in Ukraine, the story spread like wildfire. That is, until Twitter and Facebook began preventing users from sharing links to the incriminating article. As Republicans and conservatives decried the apparent “censorship,” Twitter CEO Jack Dorsey stepped in to clear the air, explaining that the article contained “hacked material,” and was therefore in breach of Twitter’s rules.

The Republicans of the House Judiciary Committee skirted the ban by placing the article on their official .gov website, telling followers to “Click, Share, and RT” the scandal-laden story.

However, users trying to click the link were met on Thursday with a warning from Twitter, telling them that the link “may be unsafe.”

So now @Twitter and @jack are blocking access to a government website...all to protect Joe Biden.
This is not only dangerous and corrupt, it's clear election interference!!! https://t.co/fnOxLiU4cJ pic.twitter.com/dzjyD7LPMz
— Donald Trump Jr. (@DonaldJTrumpJr) October 15, 2020

Twitter reversed its ban later on Thursday morning, as the Judiciary Republicans’ link worked as normal by then. A Twitter spokesman told the conservative Daily Caller that the decision to label the website "unsafe" was an "error."
Nevertheless, Republicans on the House Oversight Committee requested an emergency hearing on “Big Tech’s repeated efforts to interfere in the 2020 election,” before voters go to the polls. Senator Josh Hawley (R-Missouri), who sits on the Judiciary Committee, also called on Thursday for Dorsey and Facebook CEO Mark Zuckerberg to testify on potential “campaign law violations.”