The Nazi Romance With Islam 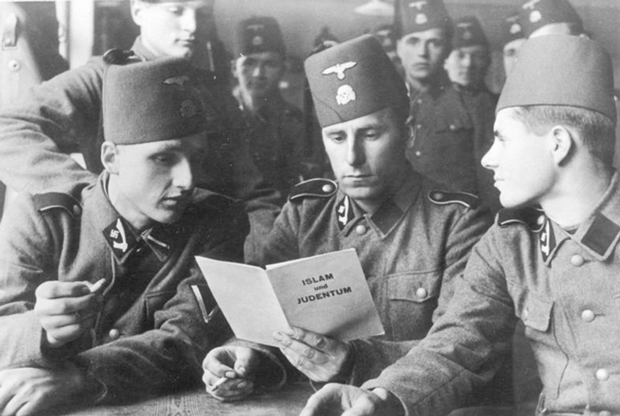 Both Hitler and Himmler had a soft spot for Islam. Hitler several times fantasized that, if the Saracens had not been stopped at the Battle of Tours, Islam would have spread through the European continent - and that would have been a good thing, since “Jewish Christianity” wouldn’t have gone on to poison Europe. Christianity doted on weakness and suffering, while Islam extolled strength, Hitler believed. Himmler in a January 1944 speech called Islam “a practical and attractive religion for soldiers,” with its promise of paradise and beautiful women for brave martyrs after their death. “This is the kind of language a soldier understands,” Himmler gushed.

Surely, the Nazi leaders thought, Muslims would see that the Germans were their blood brothers: loyal, iron-willed, and most important, convinced that Jews were the evil that most plagued the world.

“Do you recognize him, the fat, curly-haired Jew who deceives and rules the whole world and who steals the land of the Arabs?” demanded one of the Nazi pamphlets dropped over North Africa (a million copies of it were printed). “The Jew,” the pamphlet explained, was the evil King Dajjal from Islamic tradition, who in the world’s final days was supposed to lead 70,000 Jews from Isfahan in apocalyptic battle against Isa - often identified with Jesus, but according to the Reich Propaganda Ministry none other than Hitler himself. Germany produced reams of leaflets like this one, often quoting the Quran on the subject of Jewish treachery.