ISIS releases video of 21 Christians being beheaded — in Libya 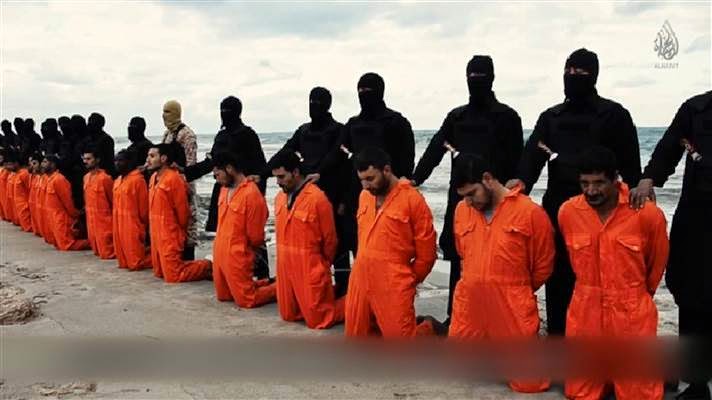 The horror show into which the Middle East has transformed over the last four years continues — and expands. ISIS released a videotape today showing not one beheading of a hostage, but the simultaneous beheadings of 21 Christian hostages. The beheadings took place not in Syria or Iraq, but in Libya:

The terrorists known as ISIS released a video on Sunday that seems to show the militant group beheading 21 Egyptian Christians kidnapped in Libya.

The Egyptians, dressed in orange jump suits, were beheaded after being forced down on the ground on a beach. An early caption in the video says the location is “Wilayat Tarabulus by the Mediterranean Sea,” which suggests that it was filmed near Tripoli.

Each of the victims, who are all male, is paired with a masked, knife-wielding terrorist and, after a brief statement by the ISIS leader, they are all beheaded.

Don’t expect to the see the video here, which was titled in part “A Message Signed in Blood.” The AP describes it so that the rest of us can pass on watching ISIS propaganda:

The video, released late Sunday night, shows several men in orange jumpsuits being led along a beach, each accompanied by a masked militant. The men are made to kneel and one militant addresses the camera in English before the men are simultaneously beheaded.