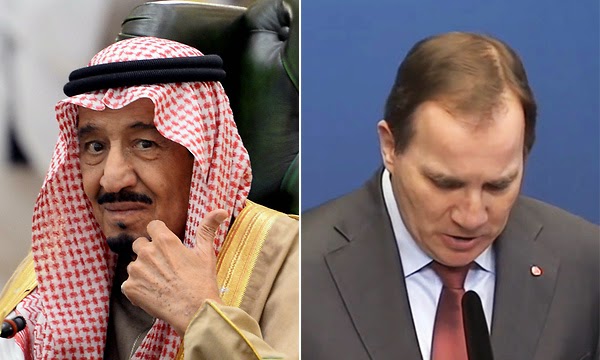 The Swedish Prime Minister added that Sweden has no intention of ever criticizing Islam. As is customary, Expressen refrained from asking the PM if his comments should be taken as an indication that Sweden would stop criticizing such Islamic practices as torturing bloggers, executing infidels and oppressing women.

It is hard to say what concessions Sweden may have given King Salman in exchange for normalizing relations. Sweden may even have agreed to further the cause of Islam back home by, for example, promising to build new mega-mosques and giving greater influence to local imams.

Sweden's Minister for Culture and Democracy, Alice Bah Kuhnke, has already promised to initiate a "national strategy against Islamophobia" -- meaning any criticism of Islam or mass immigration.

If the Swedish-Saudi deal is as conjectured, Saudi Arabia will have obtained de facto veto power over Sweden's foreign policy -- and perhaps its domestic policies.

From now on, it will be hard to take seriously Sweden's claims to be a humanitarian and feminist superpower.