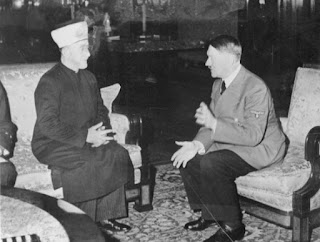 1. Hajj Amin al Husseini is the father of the Palestinian movement, and mentor to such figures as Yasser Arafat and Mahmoud Abbas, the current leader of this movement.

2. Husseini organized several mass terrorist attacks against the Jews in British Mandate Palestine. The first was in 1920. Then, after the British made him the Grand Mufti of Jerusalem, he used that position to launch new terrorist attacks in 1921, 1929, and 1936-39.

3. After he left the Mandate in 1939, Husseini went to Iraq to organize a pogrom against the Iraqi Jews that destroyed the Jewish community there (the Farhud).

4. Husseini traveled to Italy and then to Berlin, where he was received with full honors and sat down for a high-profile chat with none-other than the Führer himself.

5. Husseini spent the rest of the war in the German-occupied sphere and played an important role in Nazi propaganda inciting Muslims on the German radio to murder Jews.

6. He recruited and supervised the formation of large SS divisions made up of Bosnian and Albanian Muslims that participated in the massacres of the Yugoslav Chapter.

The Voice of Free Arabism 07.07.1942: "This is your best opportunity to get rid of this dirty race, which has usurped your rights and brought misfortune and destruction on your countries. Kill the Jews, burn their property, destroy their stores, annihilate these base supporters of British imperialism. Your sole hope of salvation lies in annihilating the Jews before they annihilate you"

"The mufti planned to build crematorium in Dotan Valley'

“Arabs, rise as one man and fight for your sacred rights. Kill the Jews wherever you find them. This pleases God, history, and religion. This saves your honor. God is with you." How did the 'Palestinian movement' emerge?

"And so, “until the autumn of 1941,” conclude Marrus & Paxton, “no one defined the final solution with precision, but all signs pointed toward some vast and as yet unspecified project of mass emigration.”

"It is true that a great many Jews were being killed on the Eastern front, and these deaths of course must be counted in what is called the Shoa (or ‘Holocaust’), but, according to these historians, “until the autumn of  1941” there wasn’t as yet a decision to kill all of the European Jews in death camps. Husseini arrived in Berlin in “the autumn of 1941” (October 1941, to be precise). Husseini thus  arrived right on time to argue powerfully in favor of what became the Wannsee Conference decision to kill every last living European Jew. This agrees  nicely with Netanyahu’s claims."

"However, I must point out that Eichmann’s testimony about his trip to Palestine to meet with Husseini makes it obvious that there  was contact between Husseini and the Nazis well before Husseini’s arrival in Berlin. This may also be inferred from German Nazi shipments of weapons to  Husseini’s terrorists during the so-called ‘Arab Revolt’ of 1936-39. Thus, Husseini had ample opportunity to argue influentially in favor of total extermination well before October of 1941. Nothing necessarily hinges, therefore, on Husseini’s arrival in Berlin, or on the exact date of the first  killings to be labeled ‘Holocaust,’ as many seem to think.

Finally, according to Dieter Wisliceny, right-hand man to Adolf Eichmann, Husseini did contribute to the Nazi decision to create a death camp system, precisely in the manner that Netanyahu claims.

After the war, and prior to his execution for crimes  against humanity, Wisliceny was asked to comment on the testimony of one Eng. Andrej or (Endre) Steiner. During the war, according to Steiner’s testimony, Wisliceny had stated that the Mufti Husseini had played an important role convincing the Nazis to opt for extermination. Wisliceny confirmed the testimony. This was all  summarized by State Attorney Bach at the Eichmann trial in Jerusalem:"

"State Attorney Bach: This is our document No. 281. Mr. Steiner first tells us that Wisliceny described his talks with  Eichmann, why Palestine cannot be considered as the destination for  emigration: “When I asked him why, he laughed and asked whether I had never heard of the Grand Mufti Husseini. He explained that the Mufti has very close contact and cooperation with Eichmann, and therefore Germany cannot agree to Palestine being the final destination, as this would be a blow to Germany’s prestige in the Mufti’s eyes.”

Then he goes on: “At this further conversation Wisliceny gave me more details about the cooperation between Eichmann and the Mufti. The Mufti is a sworn enemy of the Jews and has always fought for the idea of annihilating the Jews. He sticks to this idea always, also in his talks with Eichmann”