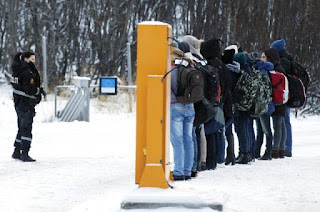 Two thirds of Norwegians oppose their country taking in more asylum seekers, a poll has found. The results represent a near reversal of public opinion on the issue in just five months. The Norwegian government is already working to dissuade economic migrants from heading to Norway to claim asylum.

In a poll conducted by IPSOS MMI and published on Saturday, 42 per cent of respondents said that they want to see Norway accepting fewer refugees, and 25 per cent said the current number should be the maximum, leaving the 28 per cent who want to see more refugees offered a home in Norway in the minority, The Local has reported.

The results are almost a mirror image of those in a June poll, which found 42 per cent wanted Norway to take in more refugees, against 31 per cent who thought there were already too many.

The country’s Prime Minister Erna Solberg has told Dagbladet that she agrees with her countrymen in wanting to see migration into Norway reduced.

“It is important that we try to limit the number of groundless asylum applications. It is in the best interests of Norwegian society, the ability to successfully integrate and for those people who have a genuine need for protection,” she said.

Last Thursday, Norway’s Parliament approved asylum reforms designed to restrict the flow of migrants into the country. The measures include a reduction in benefits for asylum seekers by 20 per cent (bringing Norway in line with its neighbours), restricting access to permanent residency, and making it harder for migrants to bring family members into the country.

It also promised to speed up the processing of asylum applications, and where applicable, expulsion of failed applicants.

The government has been making use of a number of different media channels to deter would be migrants from making for Norway, focusing particularly on those entering the country via Arctic routes across northern Russia.