War on Christmas in Norway! 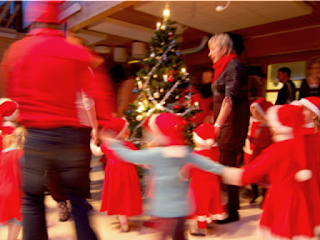 Parents at a Norwegian school were left astounded when the school asked permission for their children to take part in a Christmas ritual in which children dance around a tree singing carols. Some questioned just how much further schools will go in a bid to accommodate minorities.

Karianne Haug, whose child attends the Lesterud School in suburban Oslo, said she could barely believe her eyes when her child came home with a permission slip, asking to be allowed to take part in the traditional ceremony. The ritual, which involves dancing around a Christmas tree singing carols is normally accompanied by a religious service in celebration of Christmas, The Local has reported.

“It’s fine to ask [for one’s child] to be exempt from the religious service, that has worked fine for years,” she said. “But to have to check off permission to dance around the Christmas tree? What will be next? Where is the limit for how many considerations we should take? Who makes these considerations, and for whom?”

However, school official Gry Hovland has defended the school on the grounds that they were merely interpreting the official guidelines to the best of their ability. She said that a number of local schools have adopted a joint set of guidelines, based on recommendations from the Norwegian Directorate for Education and Training, which in turn references a Court of Human Rights ruling which recommended schools be “especially cautious” regarding religious activities with children.