Dawkins on the Non-Random Nature of Evolution 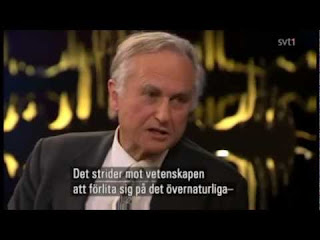 I have noticed of late that Richard Dawkins often states that Neo-Darwinism is non-random. Dawkins recently repeated this line in an interview on a Scandinavian talk show Skavlan when asked, "What is the most common misconception about Evolution?" His response was, "That it is a theory of random chance. It obviously can't be theory of random chance. If it was a theory of random chance it couldn't possibly explain why all animals and plants are so beautifully ... well designed." He goes on to say that, "What Darwin did was to discover the only known alternative to random chance which is natural selection". A few years ago he made similar comments on an Australian television show Q&A where he said, "There's random genetic variation and non-random survival and non-random reproduction". He goes on to say that, "that is quintessentially non-random".

I find it hard to understand how Dawkins, especially when he lays out step by step the process of change as described by Neo-Darwinism can claim that it is non-random, let alone quintessentially non-random when the first step of the process is by his own admission random. Am I missing something here? I would have thought that in any system no matter how non-random any subsequent steps may be, if the first step is entirely random (and depended upon by the subsequent steps even if only transitively) then the result will be random. Can you see any rational for Dawkins's claim that Neo-Darwinism is quintessentially non-random? If not, has he not shot himself in the foot during the Skavlan interview by not only using the 'D' word ('design') but also admitting, if not claiming, that the beautiful design we see in life cannot be randomly generated.

Thanks for you work. God Bless.

I think I understand what Dawkins is getting at, Simon, even if he has not expressed himself very well. When he corrects the misimpression that evolutionary theory is a theory of “random chance,” the view he means to criticize is the naïve view that the evolution of biological complexity is like a roll (or sequential rolls) of the dice. He probably has in mind comparisons of the evolution of biological complexity to a tornado’s assembling a Boeing 747 or a chimpanzee’s hammering out the plays of Shakespeare. If evolution works that way, then it becomes impossible to explain why plants and animals are so well-adapted to their environments, or to speak colloquially, why they are “so beautifully ... well designed.” Pure randomness would make it fantastically improbable that the plants and animals we observe should come to exist.

Dawkins’ point is that this admission is of no comfort to the creationist because evolutionary theory doesn’t claim that animals and plants came to exist by a purely chance process. Rather evolutionary theory holds that random mutations (“random genetic variation”) must be supplemented by natural selection (“non-random survival and non-random reproduction”), which weeds out the ill-adapted offspring of organisms. It’s not a matter of sheer chance which offspring survive and reproduce; their environment contains factors which will determine predictably which will survive. That’s why Dawkins characterizes natural selection as “the only known alternative to random chance.”

Dawkins can call evolutionary theory “quintessentially non-random” because it includes essentially a non-random element, namely, natural selection. When you object that “in any system no matter how non-random any subsequent steps may be, if the first step is entirely random . . . then the result will be random,” you and Dawkins are simply talking past each other. You would agree that the evolutionary process is not a matter of pure chance, which is his point. He would agree that it is wholly contingent what sort of organisms eventually evolve from the process because different mutations might have occurred with equal probability, which is your point. The real bone of contention is, or ought to be, the explanatory adequacy of random mutation and natural selection to produce the biological complexity we observe in the allotted time.

Your question underlines the importance of clearly defining our terms when discussing such matters. What is remarkable about Dawkins’ statements is his associating randomness with chance. This is grossly misleading. As I’ve explained before (QoW #253), when evolutionary biologists use the word “random” to characterize genetic mutations, they do not—at least when speaking in professional contexts rather than in a television interview—mean by chance. Rather they mean that the genetic variations occur irrespective of benefit to the organism in which they occur. Randomness in that sense is wholly compatible with God’s causing the mutations that occur with some end in mind and so guiding the evolutionary process to arrive at the plants and animals we observe, including ourselves as the culmination of the process. When Dawkins speaks of “random chance,” he is conflating two different concepts and so muddying the waters. He has no idea whether the random mutations which occur all occur by chance. That is a philosophical assertion, not a scientific conclusion. It is his presumed philosophical naturalism that leads him to believe that genetic variations occur wholly by chance, so that the products of evolutionary development are undesigned.