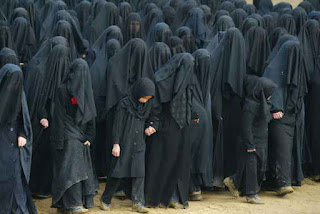 The International Women's Day started as a political event, and the holiday blended the culture of many countries, primarily in Europe, especially those in the Soviet Bloc.

In some regions, the day lost its political flavor, and became simply an occasion for people to express their love for women in a way somewhat similar to a mixture of Mother's Day and Valentine's Day.

In other regions, however, the political and human rights theme designated by the United Nations runs strong, and political and social awareness of the struggles of women worldwide are brought out and examined in a hopeful manner. Some people celebrate the day by wearing purple ribbons.

In honor of this years Women's Day, we on Spikers Corner wish to set focus on the ill treatment of women in the Islamic communities around the world by posting the Top Ten rules in the Quran that applies to oppress and insult women. These are the same rules we now are importing into our own countries, both here in Norway, Scandinavia and Europe.

1. Mature men are allowed to marry prepubescent girls.
The Quran in Sura 65:1, 4 says:
65:1 O Prophet, when you (and the believers) divorce women, divorce them for their prescribed waiting-period and count the waiting-period accurately . . . 4 And if you are in doubt about those of your women who have despaired of menstruation, (you should know that) their waiting period is three months, and the same applies to those who have not menstruated as yet. As for pregnant women, their period ends when they have delivered their burden. (Maududi, vol. 5, pp. 599 and 617, emphasis added)

2. Husbands may hit their wives even if the husbands merely fear highhandedness in their wives (quite apart from whether they actually are highhanded—as if domestic violence in any form is acceptable).
The Quran in Sura 4:34 says:
4:34 . . . If you fear highhandedness from your wives, remind them [of the teaching of God], then ignore them when you go to bed, then hit them. If they obey you, you have no right to act against them. God is most high and great. (Haleem, emphasis added)

3. A Muslim polygamist may simply get rid of one of his undesirable wives.
The Quran in Sura 4:129 says:
It is not within your power to be perfectly equitable in your treatment with all your wives, even if you wish to be so; therefore, (in order to satisfy the dictates of Divine Law) do not lean towards one wife so as to leave the other in a state of suspense. (Maududi, vol. 1, p. 381)

4. A man may be polygamous with up to four wives.
The Quran in Sura 4:3 says:
And if you be apprehensive that you will not be able to do justice to the orphans, you may marry two or three or four women whom you choose. But if you apprehend that you might not be able to do justice to them, then marry only one wife, or marry those who have fallen in your possession. (Maududi, vol. 1, p. 305)

5. Slave-girls are sexual property for their male owners.
The Quran in Sura 4:24 says:
And forbidden to you are wedded wives of other people except those who have fallen in your hands (as prisoners of war) . . . (Maududi, vol. 1, p. 319).

6. A wife may remarry her ex-husband if and only if she marries another man, they have sex, and then this second man divorces her.
The Quran in Sura 2:230 says:
And if the husband divorces his wife (for the third time), she shall not remain his lawful wife after this (absolute) divorce, unless she marries another husband and the second husband divorces her. (In that case) there is no harm if they [the first couple] remarry . . . . (Maududi, vol. 1, p. 165)

7. A woman’s testimony counts half of a man’s testimony.
The Quran in Sura 2:282 says:
And let two men from among you bear witness to all such documents [contracts of loans without interest]. But if two men be not available, there should be one man and two women to bear witness so that if one of the women forgets (anything), the other may remind her. (Maududi, vol. 1, p. 205).


9. Husbands are a degree above their wives.
The Quran in Sura 2:228 says:
. . . Wives have the same rights as the husbands have on them in accordance with the generally known principles. Of course, men are a degree above them in status . . . (Sayyid Abul A’La Maududi, The Meaning of the Qur’an, vol. 1, p. 165)

For a wider interpretation of these rules, please visit Answering Islam.