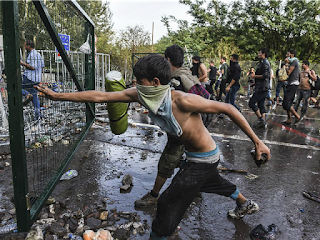 According to an EU-wide study, 70 per cent of Europeans believe Muslim migration poses a serious threat to the continent, while 86 per cent fear that terrorist attacks in their country are likely.

The survey, conducted by Hungarian think-tank the Szazadveg Foundation, polled 1,000 people in each of the European Union’s (EU) member nations. While the study was carried out in April, the publication of the results was delayed until after Britain’s referendum.

The report found that Europeans are deeply unhappy about migration and the EU’s response to the migrant crisis. It states that the majority of EU citizens believe “the immigration wave increases the risk of terrorism, the number of criminal activities, and imposes risk on the cultural integrity of the countries that are impacted by it.”

84 per cent of respondents reported concern over the level of illegal immigration to Europe and 63 per cent feared an influx of immigration would change the cultures of their countries. Asked whether “the rapid population growth of Muslims” is a threat to Europe, 70 per cent agreed. A sizable majority in each of the 28 countries felt Islam posed a threat to their country but in much of Eastern Europe this sentiment was shared by more than 80 per cent of the population.

The majority of those polled said they would vote to remain in the EU, if given a choice. The survey showed widespread dissatisfaction with the bloc’s approach to migration, however.

Despite repeated insistence by European leaders that walls or fences are an ineffective way of controlling migration they have seen remarkable successes in European state Hungary, and it seems the people of Europe have noticed. Some 83 per cent of Europeans said they wanted the EU to do more to secure its external borders. 77 per cent said they thought the bloc had handled the migrant crisis badly.

The study’s results show that “the split has never been so large between ruling elites and the grassroots,” said Andras Lánczi, Professor of Corvinus University in Budapest.