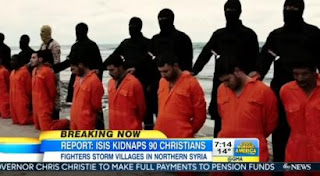 "Unfortunately, the West has rejected the idea of solidarity with the Christians of the Middle East, prioritizing diplomacy based on oil interests and the Arab-Israeli conflict. Thus, the United States, Britain, and France have largely ignored the persecutions of the Christians of Iraq, Lebanon, Egypt, and Sudan, while rushing to save the oil-rich Muslim states of Saudi Arabia and Kuwait..."
— Hannibal Travis, Professor of Law, 2006.

Indigenous Christians in Iraq and Syria have not only been exposed to genocide at the hands of the Islamic State and other Islamist groups, but also their applications for immigration to Western countries have been put on the back-burner by, shamefully but not surprisingly, the UN.

When one brings up the issue of Western states taking in Muslim migrants from Syria and Iraq without vetting them for jihadist ties, while leaving behind the Christian and Yazidi victims of jihadists, one is accused of being "bigoted" or "racist". But the real bigotry is abandoning the persecuted and benign Middle Eastern Christians and Yazidis, the main victims of the ongoing genocides in Syria and Iraq.

The German government is also rejecting applications for asylum of Christian refugees and deporting them unfairly, according to a German pastor.

Nearly a third of the respondents said that most of the discrimination and violence came mostly from refugee camp guards of Muslim descent.

It is high time that not only the U.S. but all other Western governments finally saw that the Christians in the Middle East are them.