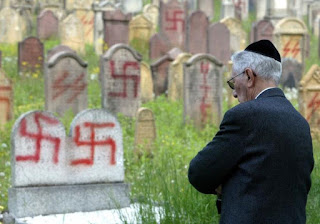 A Jewish man stands near some of the 127 graves desecrated by vandals with Nazi swastikas and anti-semitic slogans in the Jewish cemetery of Herrlisheim . (photo credit:REUTERS)

Since the beginning of the year, at least three American Jewish cemeteries have been desecrated, New York State has recorded an unprecedented spike in Nazi-themed vandalism, and over 100 bomb threats have been called or e-mailed in to Jewish Community Centers nationwide. The president condemned the phenomenon at the top of his first address to a joint session of Congress as an "evil" with no place in American society.

After two months in office, US President Donald Trump is lagging behind his predecessors in appointment major department deputies, aides and envoys. He has yet to appoint a special envoy to the Middle East peace process, an ambassador-at-large for international religious freedom or a White House liaison to the Jewish community, among several other posts that have historically provided the community with channels to interact with the president's team.

While lawmakers from both parties praised the president for his remarks, several are now calling for an actionable plan. A Bipartisan Task Force for Combating Antisemitism in the House of Representatives, comprising of four Republicans and four Democrats, sent a letter to the president two weeks ago urging a more "comprehensive federal response," including adequate funding for the civil rights division of the Justice Department, the creation of an interagency mechanism to detect and respond to new threats and a review of antisemitic activity online.