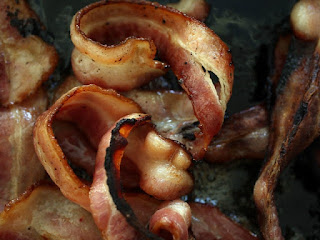 A Swedish man is facing charges in court after being accused of eating bacon too closely to a group of veiled Muslim women and calling them derogatory names.

The incident occurred in the Swedish capital of Stockholm over the weekend. The Swedish man, who has not been named by media or the police, is said to have approached the Muslim women who were wearing Islamic veils on a train while he was eating bacon and dangled the bacon in front of their faces, Swedish broadcaster SVT reports.

According to the report, the women got up to find seating elsewhere and the man followed them with his bacon. He is alleged to have called them derogatory names and made racist comments, though neither the police nor the court has specified what was said during the incident.

The prosecutors allege he then used racial epithets on another woman in the train station after getting off the train. He faces charges of incitement to racial hatred.

Reaction to the incident on social media has been a mix of laughter and disbelief amongst English language users. Twitter user PeterSweden tweeted his disbelief at the charges saying: “What’s the next step, being racist for walking your dog?”