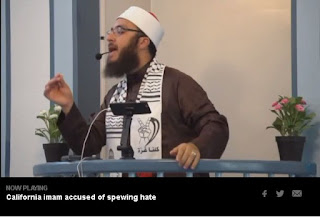 Jewish groups have asked Homeland Security and the U.S. Attorney's office to investigate a California Imam who gave a sermon calling on Allah to "annihilate" Jews "down to the very last one" -- and asked for his congregants to take part in the slaughter.

Imam Ammar Shahin gave the sermon at the Islamic Center of Davis, California on Friday. He asked for Allah to liberate the Al-Aqsa Mosque in Israel from "the filth of the Jews," according to a translation by the Middle East Media Research Institute, and cited an Islamic text that calls for a Judgement Day fight between Muslims and Jews.

“Oh Allah, count them one by one and annihilate them down to the very last one. Do not spare any of them,” said Shahin, who spoke in both Arabic and English during his sermon. “Oh Allah, make this happen by our hands. Let us play a part in this. Oh Allah, let us support them in words and in deeds.”