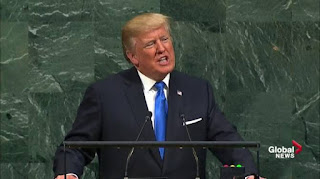 1. "The United States will forever be a great friend to the world and especially to its allies. But we can no longer be taken advantage of or enter into a one-sided deal where the United States gets nothing in return. As long as I hold this office, I will defend America's interests above all else."

2. "In America, we do not seek to impose our way of life on anyone, but rather, to let it shine as an example for everyone to watch… In America, the people govern, the people rule, and the people are sovereign. I was elected not to take power, but to give power to the American people where it belongs. In foreign affairs, we are renewing this founding principle of sovereignty."

3. "No one has shown more contempt for other nations and for the well-being of their own people than the depraved regime in North Korea… No nation on Earth has an interest in seeing this band of criminals arm itself with nuclear weapons and missiles. The United States has great strength and patience, but if it is forced to defend itself or its allies, we will have no choice but to totally destroy North Korea."

4. "The Iran deal was one of the worst and most one-sided transactions the United States has ever entered into. Frankly, that deal is an embarrassment to the United States, and I don't think you've heard the last of it. Believe me."

5. "The United States is a compassionate nation and has spent billions and billions of dollars in helping to support this effort. We seek an approach to refugee resettlement that is designed to help these horribly treated people and which enables their eventual return to their home countries to be part of the rebuilding process. For the cost of resettling one refugee in the United States, we can assist more than 10 in their home region."

6. "The United Nations must reform if it is to be an effective partner in confronting threats to sovereignty, security and prosperity. Too often the focus of this organization has not been on results, but on bureaucracy and process. In some cases, states that seek to subvert this institution's noble end have hijacked the very systems that are supposed to advance them. For example, it is a massive source of embarrassment to the United Nations that some governments with egregious human rights records sit on the UN Human Rights Council."

7. "The United States is one out of 193 countries in the United Nations, and yet we pay 22 percent of the entire budget and more. In fact, we pay far more than anybody realizes. The United States bears an unfair cost burden, but to be fair, if it could actually accomplish all of its stated goals, especially the goal of peace, this investment would easily be well worth it."

8. "The Venezuelan people are starving and their country is collapsing. Their democratic institutions are being destroyed. The situation is completely unacceptable, and we cannot stand by and watch. As a responsible neighbor and friend, we and all others have a goal – that goal is to help them regain their freedom, recover their country, and restore their democracy."