den 12.10.18
Dear Friends,
A few days ago, I stopped at a service station where four coaches full of British soldiers were taking a break. I said hello to the lads and some of them posed for “selfies” with me.
It was my great honour to stand with our troops and shake their hands, even just for a few moments.
But when the Muslim Council of the UK heard about this, they immediately demanded that the Army punish these soldiers — and to their shame, the Army did. 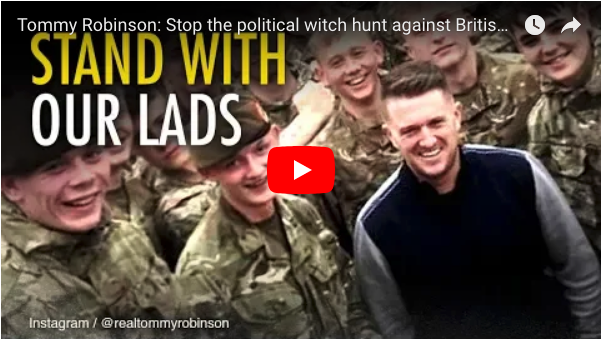 These lads had their cell phones seized and inspected for “illegal” photos of me. And the Armed Forces’ official Islamic advisor, Asim Hafiz, condemned these men — before the investigation was even complete — telling reporters that "any form of racism, discrimination or extremism is taken extremely seriously and will be dealt with accordingly".
What racism? What discrimination?
It was just a photo. These are proud British soldiers.
And now I have heard that at least one of these lads has been summarily discharged from the Army — just for standing next to me and smiling.
That’s outrageous. That cannot stand.
These lads are willing to make the ultimate sacrifice for our freedoms. The least we can do is stand up for their freedom, too.
I’m going to go down to the Ministry of Defence and hand-deliver a petition to the Chief of the Defence Staff, General Sir Nick Carter, demanding that this political witch-hunt be called off.
I started the petition last night, and it already has more than 70,000 names on it. Please take a moment to add your name to it, too — I’d like to have over 100,000 signatures on it by tomorrow.
Please click here, or visit www.StandWithOurLads.com — and forward this e-mail to your friends and family.
These soldiers would do anything for us. Please take a minute to do something small for them.
Yours truly,
Tommy Robinson
P.S. The British Army is being undermined by political correctness — but this is the worst I’ve seen. They’ve handed over decision-making to the Muslim Council. That can’t stand. Please sign the petition here, and type www.StandWithOurLads.com as your Facebook status!
P.P.S. So many people have inundated that website, it might take a minute to get through — but please keep trying. Thank you!