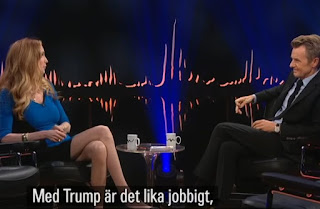 From Voice of Europe.

Ann Coulter shocked both the audience and Fredrik Skavlan when she said things that few Swedish writers would dare say on TV (Scroll down to see the video).

"It works better if cultures stay in their own countries, that is genuine diversity as apposed to one blend."

It didn’t go well when Fredrik Skavlan tried to do a critical interview with Ann Coulter in Friday’s episode (5 oktober 2018) of the SVT and NRK (both public service channels) initiative “Skavlan”.

She was outspoken to say the least, and did not mince her words about feminism and immigration when she appeared on SVT prime time on Friday.

Maybe Skavlan should have thought twice before he invited the conservative speaker and writer to his well-known show.

Coulter, known for her support for Donald Trump, talked, among other things, about the negative consequences of immigration, which she argued drives down wages for Americans, especially the poor.

“For 50 years, we have brought in immigrants from the third world. And whose wages are they driving down? The wages of the poorest.”, she said.

The editors on SVT must have torn their hair out when Skavlan then asked her if she is a feminist.

“Oh gosh, no. I don’t know what it means in Europe, but in the US it tends to mean that you’re an angry man-hating lesbian.”, she stated.

After a brief silence, and a resentful reaction from the audience, a stunned Skavlan replied “Well, it doesn’t does it?”

“It does!” Coulter confirmed.

She was also openly critical of the fact that women have the right to vote because, according to her, it has not proved to be good for society.

“This is very interesting,” said an even more perplexed Skavlan.

She also likened Donald Trump to a necessary “cancer treatment” that could destroy mainstream media, and then let real, more ethical journalism emerge and replace it.

At the same time, however, she said she was disappointed that the American president didn’t keep all his promises, like building the US-Mexico border wall and pulling back all troops from Afghanistan.

At the end of the program, Skavlan stated that her thoughts on immigration are “strange” to Europeans and Scandinavians. Coulter then pointed out that mass immigration will ultimately lead to the disappearance of the peoples and cultures of the world and that everyone will look alike.

“You wouldn’t last 5 minutes in Sweden”, Skavlan told her out of the blue. It is unclear what he meant by that, and it is also unclear why the audience applauded his statement.

He’s right, though. Beautiful, blonde outspoken women who refuse to cover themselves in hijabs, niqabs or burkas are anything but safe in Sweden these days.

She ignored his comment and continued; “It works better if cultures stay in their own countries, that is genuine diversity as apposed to one blend”, she said.

“You want to end all cultures”, she told Skavlan, who denied that it is what he wants.

When Skavlan argued that the US “is all about immigration,” Coulter replied that he is wrong, and that the country is a former British colony built on freedom and nothing else.

In summary, Skavlan tried to put Coulter on the spot and failed miserably. Coulter was excellent as always, and proved very clearly that the highly biased mainstream media (especially public service) needs to go and be replaced by real, fact based and truthful journalism. 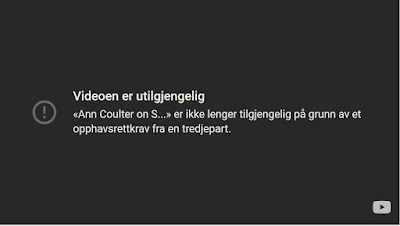