Frankenstein: Have We Heeded the Warning? 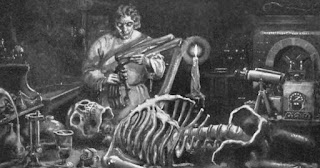 Two hundred years ago, Mary Shelley published her famous novel, Frankenstein. It warned against the possible horrors that could come about through our scientific hubris. In the novel the scientist Victor Frankenstein worked diligently two years to bring life to a dead body. He succeeded, which should have caused him to celebrate. Instead, he was revolted by his creation.

The monster later lamented, “I, the miserable and the abandoned, am an abortion, to be spurned at, and kicked, and trampled on. Even now my blood boils at the recollection of this injustice.” He was outraged at the way Frankenstein and others treated him.

Shelley’s cautionary tale of a scientific experiment run amok has profound implications for today’s bioethics debates. Should we yield to the siren song of biotechnological progress? Will biotechnology bring us utopia, or should we fear unintended consequences?

Frankenstein and the Specter of Today’s Biotechnology

Biotechnology has brought us many good things, such as medical therapies that regenerate damaged tissues. However, it has also brought us techniques that seem more troubling, such as cloning.

Today some scholars assure us that we should go much further than just repairing diseased parts. They propose that we take control of human heredity. They hope to bioengineer a new and better species. Julian Savulescu, an Oxford University philosopher who edits the Journal of Medical Ethics, is a prominent voice in this movement known as transhumanism.

The goal of transhumanists seems noble: improve humanity. They want to enhance our physical, mental, and even moral traits. This sounds good, but how will it be done? By genetic engineering, selective reproduction, and hormone therapies. Many people are rightly wary of these techniques. However, many scientists resist any restrictions on their experiments. They assure us that their intentions are only to help.

Frankenstein, of course, had the best of intentions. He foresaw nothing but happiness and bliss, once he had mastered the technique of animating dead bodies. While working on his experiment, he exulted, “Life and death appeared to me ideal bounds, which I should first break through, and pour a torrent of light into our dark world. A new species would bless me as its creator and source; many happy and excellent natures would owe their being to me.”

His utopian vision evaporated, however, once his creature came to life. He quickly recognized his tragic mistake. He admitted, “now that I had finished, the beauty of the dream vanished, and breathless horror and disgust filled my heart.” Because the creature was stronger than its creator, at one point the monster remonstrated with Frankenstein, saying, “You are my creator, but I am your master; — Obey!” Frankenstein refused, so his creation murdered him and others dear to him.

Love Is Better Than Knowledge

Another theme woven throughout Shelley’s novel is the need for human love and companionship. The monster insists that when he was created, he was kindly and benevolent. However, no one reciprocated his love. Even his own creator spurned him. Only the mistreatment he received drove him to doing evil.

At one point, the monster berated Frankenstein for his unloving behavior. He said, “I was benevolent and good; misery made me a fiend. Make me happy, and I shall again be virtuous.” After receiving this scolding, Frankenstein confessed, “For the first time, also, I felt what the duties of a creator towards his creature were.”

This is an astonishing revelation. In his zeal to foster scientific progress, Frankenstein neglected to think about his moral obligations. Shelley seems to be reminding us that raw scientific pursuit, carried on without love and without considering our moral responsibilities, may come back to haunt us. It may even destroy us.

Shelley’s novel still resonates today. It sells over 50,000 copies per year in the U.S. However, maybe the reason it is still so popular is because we are still terrified by the prospects of technology run amok. Are scientists today still so concerned about advancing knowledge that they ignore the consequences for humanity? Are they so focused on knowledge that they forget about love? Perhaps we still need Shelley’s novel as a reminder.