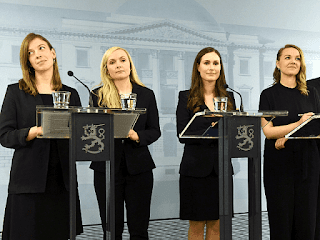 From Breitbart - Suggested by Kirkehøyden.

Finland’s millennial feminist-led government faces a vote of no confidence after pledging to send personnel to the Greek border — to help migrants claim asylum.

34-year-old Green League politician Maria Ohisalo, who serves as Minister of the Interior under 34-year-old Social Democratic party leader Sanna Marin in a red-green left-wing coalition government, said Finland was following the common European Union line to “reject Turkey’s attempts to use people as political pawns” — but also said that the Greek government’s decision to suspend asylum applications was “wrong”.

The Greeks have been faced with huge pressure at their land border with Turkey, where thousands of migrants have massed, facilitated by transport provided by the Turkish authorities.

The migrants have been making violent sallies against Greek border forces for days, often under cover of tear gas fire on the Greek lines by Turkish personnel — although the Turks claim this has only been in response to the Greeks firing tear gas at them.

But despite going along with the official EU-mandated line of support for the Greek government and committing to “sending a four-guard unit to take part in a rapid border intervention operation” on the Greek border, according to public broadcaster Yle, the Finnish government has also denounced the Greek government’s decision to suspend asylum applications — and suggested any Finnish personnel on the ground will “try to support Greece” by receiving asylum seekers.

Danish personnel operating in Greek waters with Frontex, the European Union Border and Coast Guard Agency, have already boasted of having defied orders from Greek senior officers to turn back illegal migrants arriving in Greek territorial waters by sea, instead bringing them to the Greek island of Kos.

The Finns Party — formerly the True Finns — is calling for a vote of no confidence in the left-wing government over its contradictory position on the border crisis, which was further complicated by finance minister Katri Kulmuni, 32.

Kulumni, filling in for the prime minister — who had jetted off to New York to attend United Nations events marking International Women’s Day — stated: “We support Greece in ensuring its external borders hold. Connected to this is the fact that international law and human rights must be observed.”

The Finns Party deemed that this amounted to obfuscating the government’s position, as supporting Greece’s efforts to hold its border while also insisting on its supposed obligations to receive people claiming to be asylum seekers are mutually exclusive positions.

For its part, the Finnish government has insisted it will not turn away any migrants who arrive at its own border.