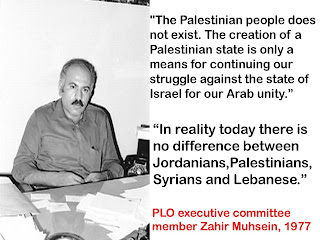 Yes, the existence of a separate Palestinian
identity serves only tactical purposes. The
founding of a Palestinian state is a new tool
in the continuing battle against Israel ...
-- Zuheir Muhsin, late Military Department head
of the PLO and member of its Executive
Council, Dutch daily Trouw, March 1977

Although a politically based mythology has grown up around and smothered, the documented past of the land known as "Palestine," there is recognition among preeminent scholars of what one of them has called "the more chauvinist Arab version of the region's history as having begun with the Arabs and Islam."1

The claim that Arab-Muslim "Palestinians" were "emotionally tied" to "their own plot of land in Palestine" -- based upon a "consistent presence" on "Arab" land for "thousands of years"2 -- is an important part of that recent mythology.

It was contrived of late in a thus far successful Orwellian propaganda effort-an appeal to the emotions that would "counter Zionism" and that "serves" tactical purposes as a new tool in the continuing battle against Israel," as the late PLO official Muhsin stated candidly in an interview, quoted at the beginning of this chapter.

In order to understand how that tool, aided by a general near-ignorance of the "unrelenting past," has distorted the perception of the present, a look at the "yesterday" of "Palestine" is necessary.

The inspection will be focused upon completing a circle-tracing the actual conditions and events that have been glossed over or omitted from the dialogue about the Arab-Israeli conflict; they are conditions and events that shaped the real political, economic, and demographic circumstances in the area. Those circumstances in turn critically affected what "justice" really consists of-for the Jewish and Arab refugees, or the "Palestinian Problem"-for the Arab-Israeli conflict.  Illuminating that situation reveals and fills in the chasm between the documented facts and the Arab claims, and gives perspective to those contentions and assumptions that have become key in interpreting what is "just" for the population in question today.

"The only Arab domination since the Conquest in 635 A.D. hardly lasted, as such, 22 years...," the Muslim chairman of the Syrian Delegation attested in his remarks to the Paris Peace Conference in February 1919.3

The British Palestine Royal Commission reported in 1937 that "it is time, surely, that Palestinian 'citizenship' . . . should be recognized as what it is, as nothing but a legal formula devoid of moral meaning."4

That the claim of "age-old Arab Palestinian rights to Arab Palestine" is contradicted by history has been pointed out by eminent historians and Arabists.

According to the Reverend James Parkes, "The Land was named Palestina by he Romans to eradicate all trace of its Jewish history..."

It may seem inappropriate to have devoted so much time to "a situation which passed away two thousand years ago." But it is only politically that the defeat by Rome, and the scattering of the Jewish population, made a decisive change in the history of The Land. That which had been created by more than a thousand years of Jewish history [a thousand years before A.D. 135] remained, as did that which was beginning to be created in the thoughts of the young Christian Church.5
Many authorities have addressed the misconceptions surrounding the word Palestine. The name derived from "other migrants from the northwest, the Philistines.  Though the latest arrivals, and though they only exercised control over the whole country for a few uncertain decades, they had been the cause of its name of Palestine. These Philistines were an Aegean people, driven out of Greece and Aegean islands around about 1300 B.C.E. They moved southward along the Asiatic coast and in about 1200 attempted to invade Egypt. Turned back, they settled in the maritime plain of southern 'Palestine', where they founded a series of city-states."6
According to Bernard Lewis, an eminent authority, "The word Palestine does not occur in the Old Testament. . . . Palestine does not occur in the New Testament at all."

The official adoption of the name Palestine in Roman usage to designate the territories of the former Jewish principality of Judea seems to date from after the suppression of the great Jewish revolt of Bar-Kokhba in the year 135 C.E.... it would seem that the name Judea was abolished ... and the country renamed Palestine or Syria Palestina, with the ... intention of obliterating its historic Jewish identity. The earlier name did not entirely disappear, and as late as the 4th century C.E. we still find a Christian author, Epiphanius, referring to "Palestine, that is, Judea."
As many, including Professor Lewis, have pointed out, "From the end of the Jewish state in antiquity to the beginning of British rule, the area now designated by the name Palestine was not a country and had no frontiers, only administrative boundaries; it was a group of provincial subdivisions, by no means always the same, within a larger entity.7 [See the map of "Ancient Palestine" in Appendix I"
In other words, it appears that Palestine never was an independent nation and the Arabs never named the land to which they now claim rights. Most Arabs do not admit so candidly that "Palestinian identity" is a maneuver "only for political reasons" as did Zuheir Muhsin. But the Arab world, until recently, itself frequently negated the validity of any claim of an "age-old Palestinian Arab" identity.

The Arabs in Judah-cum-Palestine were regarded either as members of a "pan-Arab nation," as a Muslim community, or, in a tactical ploy, as "Southern Syrians."8 The beginning article of a 1919 Arab Covenant proposed by the Arab Congress in Jerusalem stated that "The Arab lands are a complete and indivisible whole, and the divisions of whatever nature to which they have been subjected are not approved nor recognized by the Arab nation."9 In the same year, the General Syrian Congress had the opposite view; it expressed eagerness to stress an exclusively Syrian identity: "We ask that there should be no separation of the southern part of Syria, known as Palestine . . .'10 The Arab historian George Antonius delineated Palestine in 1939 as part of "the whole of the country of th name [Syria] which is now split up into mandated territories..."11 As late a the 1950s, there was still a schizoid pattern to the Arab views. In 1951, the Constitution of the Arab Ba'ath Party stated:

The Arabs form one nation. This nation has the natural right to live in a single state and to be free to direct its own destiny ... to gather all the Arabs in a single independent Arab state.12
A scant five years later, a Saudi Arabian United Nations delegate in 1956 asserted that "It is common knowledge that Palestine is nothing but Southern Syria."13  In 1974, Syria's President Assad, although a PLO supporter, incorporated both claims in a remarkable definition:
... Palestine is not only a part of our Arab homeland, but a basic part of southern Syria." 14
The one identity never seriously considered until the 1967 Six-Day War -- and then only as a "tool" -- was an "Arab Palestinian" one, and the absence was not merely disregard. Clearly there was no such age-old or even century-old "national identity." According to the British Palestine Royal Commission Report,
In the twelve centuries or more that have passed since the Arab conquest Palestine has virtually dropped out of history.... In economics as in politics Palestine lay outside the main stream of the world's life. In the realm of thought, in science or in letters, it made no contribution to modem civilization. Its last state was worse than its first.15