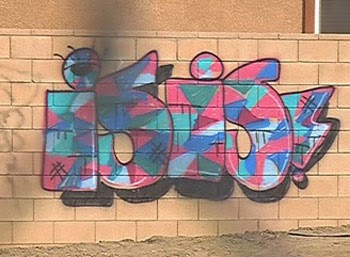 On February 4, 2015 the head of the FBI’s counterterrorism division, Michael Steinbach said that the FBI has seen children as young as 15 recruited by the Islamic State aka ISIS, ISIL. Two days later FBI Director James Comey said there are open cases looking into individuals who may be connected to ISIS in every state in the Union except Alaska. Evidence of the Islamic State’s successful recruiting efforts in America is literally written on the walls. Islamic State graffiti has appeared in Minneapolis, MN, Houston, TX, La Vegas, Nevada, Phoenix, AZ, Bakersfield, Ca, Washington, DC , Brooklyn, NY, and in many cities around the world. Followers of the U.S. designated terrorist group are showing their support in every form of graffiti from full color pieces to the graffiti genre of stickers; aka labels or slaps.

On October 2, 2014 in the Lyndale neighborhood of Minneapolis, graffiti was reported via neighborhood watch mobile app. The graffiti depicted the words ISIS in bubble letters with the phrase ‘will remain’ underneath, next to an accurate line drawing of the black ISIS flag with Arabic writing and the Prophets seal. The phrase ‘ISIS will remain’ is a reference to the terrorist groups motto ‘Remaining and Expanding’. The level of detailed knowledge of the Islamic States symbolism in this graffiti is clearly indicative of an ISIS sympathizer. This should not be surprising since at least a dozen young American Muslims from Minneapolis and St. Paul have left their homes to join and fight alongside ISIS in Syria. Two U.S. citizens from Minnesota were killed in Syria fighting beside ISIS.