U.S. Seen in Middle East as Ally of Terrorists 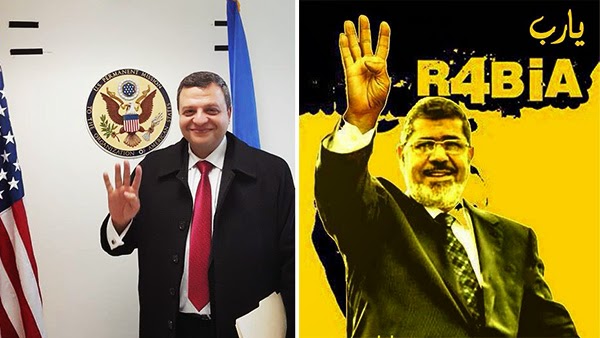 While being hosted by the State Department on a visit to Washington, Muslim Brotherhood judge Waleed Sharaby (left) flashed the organization's four-finger "Rabia" sign. At right, ousted Egyptian President Mohamed Morsi (from the Muslim Brotherhood) displays the Rabia sign.

Many Egyptians and moderate Arabs and Muslims were shocked to hear that the U.S. State Department recently hosted a Muslim Brotherhood delegation. They were equally shocked when an EU court decided to remove Hamas from the bloc's list of terror groups.

"The Muslim Brotherhood is seeking to return to the political arena through the American door and terrorist attacks. The U.S. policy appears to be devious and unreliable." — Ezzat Ibrahim, columnist, Al Ahram.

"[Ousted Egyptian President] Mohamed Morsi, before his election, described these Jews as descendants of apes and pigs. In English, the Muslim Brotherhood says one thing and in Arabic something completely different." — Mohamed Salmawi, Egyptian columnist