The Truth About “Back Alley” Abortions 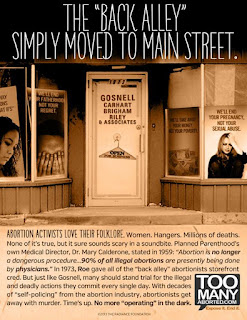 With the arrest of Dr. Kermit Gossnell and his associates for running an abortion “house of horrors” in Philadelphia, and legislative proposals to strip Planned Parenthood of government funding at the state and federal levels, abortion advocates are falling back on the claim that any effort to regulate the abortion industry will lead to the closing of clinics and a rise in dangerous “back alley” abortions.

But these claims are based on myths. The truth is that legal abortion has increased, rather than prevented, the pain, suffering and exploitation of women.

5 Myths About “Back Alley” Abortions:

Myth #2. Tens of thousands of women died from illegal abortions every year. This pseudo-fact was much repeated by the media. The late Dr. Bernard Nathanson, one of the co-founders of the National Abortion Rights Action League and the obstetrician/ gynecologist who directed what was in the 1970s the world’s largest abortion clinic, later revealed that leading abortion proponents knew this figure was false but considered it to be “useful” in their public relations campaign. Even Planned Parenthood’s own leading statisticians admitted that the official statistics on deaths resulting from illegal abortion were very accurately reported prior to 1973. In 1972, there were only 39 maternal deaths related to illegal abortion, not the thousands proclaimed by pro-abortionists.

In fact, deaths from illegal abortions were already declining or leveling off prior to 1973. After legalization, this trend remained unchanged. Deaths eliminated from the illegal abortion column were replaced by deaths resulting from legal abortion.

This occurs for many reasons: to spare the surviving family members embarrassment, to limit liability exposure, to avoid tarnishing public perceptions of abortion, and simply because the death is no longer related to a criminal activity.

Independent studies have confirmed the fact that the official statistics on maternal mortality following legal abortions are woefully inaccurate. Most recently, a single researcher examining public records was able to document 50 percent more deaths related to legal abortion than had been reported in the “official” government reports. The researcher, Kevin Sherlock, insisted that even his efforts have uncovered only a small fraction of these misclassified abortion related deaths. Further, researchers in Finland who linked women’s death certificates to their medical records found that 94 percent of maternal deaths associated with abortion are not identifiable as such when looking at the the death certificates alone.

Myth #3. There were a million illegal abortions performed each year. This was another made-up number intended to shock the public with the “overwhelming” dimensions of this unstoppable problem. Scientific estimates based on known deaths and complications related to illegal abortion show that the actual rate of illegal abortions was in the range of 60,000 to 200,000 per year.

Further, research and anecdotal evidence finds that most women having abortions are pressured or coerced to do so by someone else — and that most abortions are likely unwanted. Before 1973, women could refuse an unwanted abortion on the grounds that it was illegal, unsafe and immoral. Legalization has made it easier for those around her to insist that because abortion is legal, it must be “safe,” and because it is “socially approved,” it must be moral. It makes it easier for them to refuse to support her desire to continue the pregnancy and insist that she abort anyway. For example, when actress Hunter Tylo was fired from the TV show Melrose Place after she became pregnant, her pregnancy discrimination suit quoted a producer as saying, “Why doesn’t she just go out and have an abortion? Then she can work.”

There are also many deaths which are indirectly caused by abortion. Women with a history of abortion are 3.5 times more likely to die following abortion and six times more likely to commit suicide than are women who give birth. They are also more prone to substance abuse and other forms of risky behavior that may lead to death. Indeed, more than 30 studies published in the last five years alone have linked abortion to higher rates of mental health problems, including depression, substance abuse, suicidal behavior, and anxiety disorders — including symptoms of post-traumatic stress disorder.