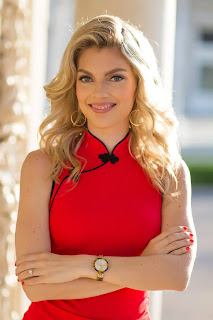 Elizabeth Wheeler (better known as Liz Wheeler, born July 12, 1989) is an American television anchor, social media manager, and activist. She is based in San Diego.

Liz Wheeler was born and raised in Sharonville, Ohio outside of Cincinnati. Her father was a small business owner while her mother was a homemaker, has three sisters and one brother.

In high school, Wheeler wrote her first guest blog post called "erring on the side of life," which talked about the issue of abortion. She graduated high school at the age of 16.

After high school, she went on to attend Penn State where she majored in Political Science and minored in Homeland Security.

In 2012, Wheeler was appointed to be the commissioner of her hometown's Board of Zoning appeals becoming the youngest person in her town's history to do so. Along with 13 other young activists, Wheeler authored the book called Young, Conservative, and Why it's Smart to be like Us and reached #2 on Amazon's Kindle​ bestseller list in the "civics" category.

In 2011, Wheeler joined RecruitMilitary, a career placing service for American veterans, as their social media manager. After gaining experience, she started freelancing in 2013.

In September 2015, Wheeler joined the One America News Network hosting her own primetime show, Tipping Point with Liz Wheeler. Many of her segments detail cases of political correctness​.​ Her "Final Point" videos have been shared on social media and she has gained a following on multiple platforms.

Liz Wheeler was the youngest person to serve on the Board of Zoning Appeals in her hometown in Ohio.

In 2018, Politico​ listed Liz Wheeler as one of the "titans" of the populist right.

She is a frequent keynote speaker at conservative gatherings around the United States.