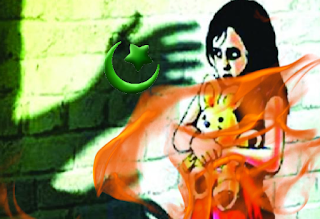 Devout Muslim neighbor sets little girl ablaze because she refused to have sex with him.

Islamic doctrines command Muslim men to hate all non-Muslims and to see women—especially infidel women—as little more than sex objects (or, in the words of a Muslim who recently murdered a Christian girl in Pakistan for refusing him sex, “Christian girls are only meant for one thing: the [sexual] pleasure of Muslim men.”

Moreover, Islamic clerics routinely encourage Muslims to migrate to the West and help empower Islam anyway they can—including through propaganda, proselytization, apologetics, births, theft, etc.—and not just through violent jihad. If they do any of these, they technically become jihadis (after all and as the apologists are fond of insisting, jihad literally means “striving” on behalf of Islam.) Thus many Muslim rapists in Europe believe it is their Islamic right and reward to molest and rape infidel women. (more here)

Quran (33:50) – “O Prophet! We have made lawful to thee thy wives to whom thou hast paid their dowers; and those (slaves) whom thy right hand possesses out of the prisoners of war whom Allah has assigned to thee”

Quran (23:5-6) – “..who abstain from sex, except with those joined to them in the marriage bond, or (the captives) whom their right hands possess…”

Quran (4:24) – “And all married women (are forbidden unto you) save those (captives) whom your right hands possess.”

G Shashikala | HENB | Kurnool | A 35-year-old Maulana (a Muslim man revered for his religious learning or piety) allegedly poured petrol on a 12-year-old hindu girls of Dalit community, his neighbour, for refusing his sexual advances and set her on fire at Badinehall village in Kowthalam mandal of Kurnool district in Andhra Pradesh.

The condition of the girl is said to be critical. She was first admitted to Adoni general hospital and then was moved to Kurnool government general hospital. The Hospital authority also told that the patient was responding the treatment well.

Police identified the accused as Mohiuddin Saheb, who has reportedly been harassing the victim for several months. When the girl complained to her parents about the harassment, her parents reportedly warned their neighbour Mohiuddin to stay away from the girl. As retribution, he poured petrol on her and set her on fire on Saturday.

The incident occurred at about 8 pm on Saturday when the girl was going out to fetch some groceries on the lonely road.

After setting the girl on fire, Moulana Saheb ran away.

Passers by who were attracted by the screams of the girl rushed to the spot and found her on fire.

As per report, the culprit Maulana was arrested by police on the day next and kept on remand.

An FIR has been registered in the Kowthalam police station under Section 12 of the Prevention of Children from Sexual Offences Act (POCSO), Section 307 (attempted murder)  and SC-ST Atrocities Act.

Will any silent son and daughter of bitches from the intelligentsia, media or NGOs raise their voice to protest the brutal attack on a minor dalit girl as they all went extreme on Kathua rape and murder case?

No, they are now not able to see anything disturbing in the present case as the culprit is a Muslim Moulana and the victim is a Dalit Hindu Girl!