How Can You Invite A Terrorist to an Anti-Terror Rally? 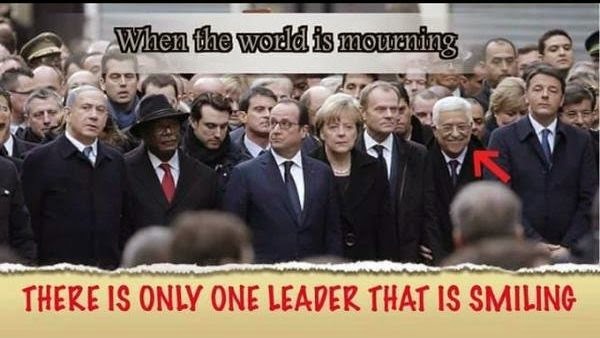 The last person who should have been invited to the million-plus rally in Paris Sunday, said Economics Minister Naftali Bennett, was Palestinian Authority chief Mahmoud Abbas. “If we want to fight terror, we have to call it by name. Both Abbas and the Emir of Qatar, who was also invited to the rally, have their hands full of the blood of terror. How can the West fight terror if it is willing to live with terror?”

Abbas is a known Holocaust denier, Bennett told Arutz Sheva from Paris, where he took part in the rally, and inviting such a person to an anti-terror event “makes a farce of the whole thing. We have to wake up and call this what it is – not generic 'terror,' but Islamic terror that is hitting us with full force.”

Bennett also said that Israel needed to do whatever it could to encourage French Jews to move to Israel. “I met hundreds of Jews in a series of meetings,” said Bennett. “Many of them are fearful and want to come live in Israel.”

If there was ever a time to resolve the bureaucratic issues involved in enabling people to make aliyah, now was the time.

“We need to get them the Israeli equivalents of their diplomas and licenses and find them places to work,” said Bennett. “Otherwise we will lose this historic opportunity to bring them here, and they will go to Canada or the United States.”

In the wake of Friday's terror attack at a kosher market in Paris, hundreds of French Jews have begun making plans to leave the country, many sources in the community say – and hundreds showed up at an Aliyah Fair held by the Jewish Agency Sunday that was held under tight security in central Paris. The fair had been planned in advance of the past week's terror attacks at the Hyper Cacher market and the Charlie Hebdo magazine.

In an interview with IDF Radio Sunday, Rabbi Moshe Sabag, spiritual leader of the Great Synagogue of Paris, said that he expected French aliyah – immigration to Israel – double this year. While 2014 set a single-year record for French Jewish immigration to Israel, Rabbi Sabag believes that “14,000 or 15,000 immigrants will come to Israel this year as a result of what has happened. There is a sense of insecurity and that these events are just getting worse."