Open Letter to the French President 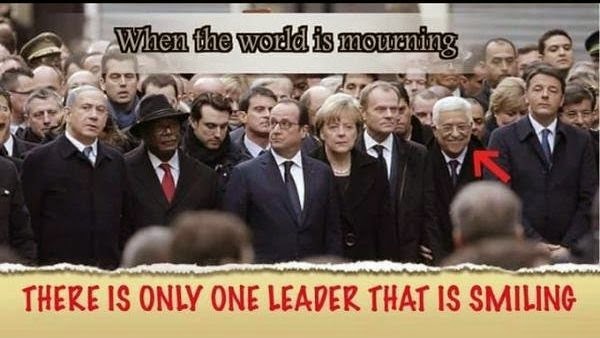 Your Excellency, many Palestinians nearly fell off their chairs upon seeing their president march at the front row of a rally in your capital to protest against terrorism and assaults on freedom of the media.


Undoubtedly, you are unaware of the fact that President Abbas is personally responsible for punishing Palestinian journalists who dare to criticize him or express their views in public. Every day we see that the Western media, including French newspapers and magazines, does not care about such violations unless they are committed by Israel.


Your Excellency, you are completely mistaken if you believe that Abbas and his Palestinian Authority are tolerant toward satire or any form of criticism. While he was attending the rally, a human rights group published a report accusing the Palestinian Authority of "waging war" against university students in the West Bank.

President Abbas has managed once again to deceive you and the rest of the international community. He now has managed to create the false impression that he cares about freedom of speech and independent journalism

Palestinians like me will now pay a heaver price because Abbas has been emboldened and will now step up his assaults. France will be helping to establish another corrupt and repressive Arab dictatorship -- one that glorifies and rewards terrorists no different from those who carried out the Paris attacks.

I hope now your Excellency understands why I am too scared to reveal my identity.