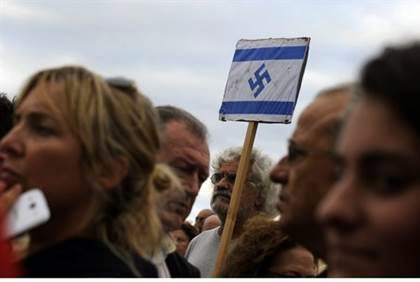 The severe upswing in anti-Semitism in several European countries is so significant that Newsweek has made it its cover story. The sympathetic Newsweek report is entitled, "Exodus: Why Europe's Jews are Fleeing Once Again."


The article is replete with references to the Holocaust, rendering it much more than just another hate-crimes report. It rather relays that the same sentiments that led to genocide seven decades ago are again most prevalent in modern-day Europe. The cover photo of a young Jewess with an old suitcase, the words "Once Again" in the headline, and comparisons with Holocaust events - all paint a picture of not merely fleeting anti-Semitism, but of a genuine phenomenon that could once again change the face of Europe.


Newsweek notes that the European Jewish Congress has even set up a website, www.sacc.eu, providing Jewish communities and individuals with advice and contacts in the events of an attack.

The increasing anti-Semitism is felt in the growing number of violent attacks, particularly in France, Hungary, and Sweden, as well as in the strong showings of anti-Semitic political parties in recent elections.

A survey published last November by the EU's Fundamental Rights Agency found that 29% of European Jews had considered emigrating because they do not feel safe.

Aliyah from France, widely recognized as stemming at least as much from fear as from Zionism, has spiked sharply. A full 1% of the French Jewish community, or 5,000 Jews, are expected to make Aliyah to Israel during 2014, according to Jewish Agency Chairman Natan Sharansky; some say it could reach 6,000. This comes on the heels of the Aliyah of 5,000 French Jews between 2011 and 2013.

The Newsweek cover photo of a refugee has elicited shocked reactions - according to the pictured "refugee" herself, Moriah Haddad-Rodriguez, an Israeli citizen who grew up in Belgium. "My own brother can no longer walk safely in parts of Belgium wearing a kippah or speaking Hebrew," she says. "Pro-Palestinian demonstrations are simply anti-Semitic events in disguise, and they end with cries of 'Jews to the gas chambers!'"

The article ends with this challenge issued by Sharansky: "Jewish communities in Europe... are more and more hesitant about what their future is. Europe's leaders are working hard to convince that Europe is multicultural and post-nationalist. But if the oldest minority in Europe feels uncomfortable and is disappearing, that raises questions of education and citizenship. That is the challenge for Europe's leaders.