Helpless French police are over-run by hundreds of migrants 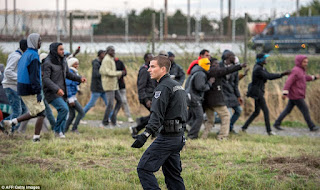 David Cameron was today accused of failing to get a grip on the Calais crisis and leaving it to the French as panicked Gendarmerie were again overwhelmed by hundreds of desperate migrants who laid siege to the Channel Tunnel for the third night running.

Around 4,000 people have stormed fences and desperately tried to clamber on trains bound for Kent in the past three days - a deadly gamble that has allowed at least 150 to get to Britain but also claimed the lives of nine people.

The deepening crisis has led to 120 French riot police being called up to help the 250 uniformed officers already there but critics say that this is nowhere near enough and believe David Cameron must now send British troops.

Migrants are still easily breaching the 15 mile fence surrounding the Channel Tunnel and jumping on to moving high speed trains or trying to get in or under lorries queuing to get on trains. Outside others will try to clamber on to vehicles heading to the nearby ferry port.

Senior MPs, backed by hauliers, have demanded the British Army should be sent in to restore order because the French authorities had 'lost control', David Cameron today blamed the crisis at Calais on the 'swarm of people' crossing the Mediterranean, and backed the French to deal with it.

But Labour's shadow home secretary Yvette Cooper said the Prime Minister's attempts at diplomacy with the French government 'isn't working' and added: 'Still not enough is being done to stop a difficult situation becoming desperate'.