“We don’t want a flood of asylum seekers, we don’t want Islamization. We want to keep our country with our values. Is that so terrible? Does that make us Nazis? Is it a crime to be a patriot?”- Michael Stuerzenberger, leading German counter-jihadist.

IB Times (h/t Maria J)  Fifteen thousand people marched in the eastern German city of Dresden on Monday (15 December) in protest against “asylum cheaters” and the rising “Islamisation” of the West. One of the demonstrators, Michael Stuerzenberger, said that while he is not opposed to the asylum for refugees, “70 percent of people claiming political asylum here are economic refugees. We don’t want to stay silent about this anymore.

Marking a 50% rise in attendance since the demonstration last Monday, the founder of the PatrioticEuropeans Against the Islamisation of the Occident (PEGIDA), Lutz Bachmann, addressed the protestors saying: “The people are with us! Everywhere now, in every news rag, on every senseless talk show, they are debating, and the most important thing is: the politicians can no longer ignore us! 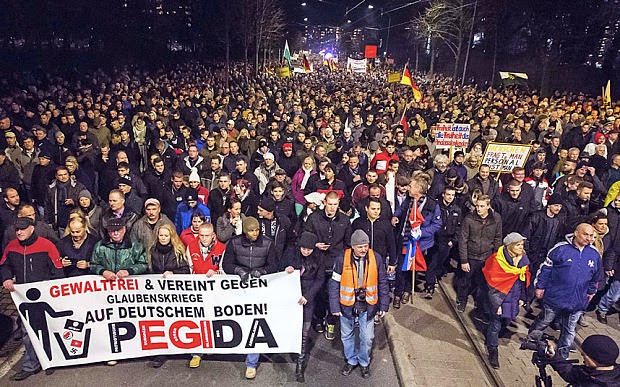 SMH A new grassroots movement that assails the German government for ignoring its fears of being overrun by Muslims and other immigrants attracted a record 15,000 marchers on Monday in the eastern city of Dresden. The fast-growing movement that calls itself PEGIDA, or Patriotic Europeans Against the Islamisation of the West, has drawn support from the far right, as well as some ordinary Germans alarmed by a sharp rise in refugees, many fleeing conflict in the Middle East.

The rallies have spread rapidly across Germany since starting with a social-media appeal in Dresden two months ago. They are now beginning to unsettle the German political establishment, which has spent decades restoring Germany’s image as an open, tolerant country after the devastation of the Nazis.
Labels: English
Nyere innlegg Eldre innlegg Startsiden